Whose Poop Is This, Anyway?

With great snow comes great track-ability. Or something like that. The other day when Delia and I were fetching she decided to leave the fetch pitch and do a wandering tour of the "garden" area, sniffing and snuffling all the way. I followed her so I could see where she would drop her ball. Then I noticed these tracks in the National Forest that came right up to, or started right from, our fence. They were too old to tell exactly what they were and Delia's tracking obscured all the prints inside the fence so there was no hope of finding a better set. I could tell that they weren't deer and probably weren't dog unless someone in the area lets their teeny, tiny dog wander the forest alone. They didn't seem like rabbit and they were too big for squirrel.  Our neighbors have an ermine living in a brush pile, so maybe we have one around, too?

Truth be told, I know whose poop that is; it is Delia's. But what I do not know is why her little dog brain thought pooping at the terminus of the mystery tracks on her second pass through the garden was a thing to doo*.

*See what I did there?

Who's got two thumbs and is getting proficient at chaining up her tires? This gal!


We've been getting snow in smallish doses over the last couple of weeks and it's accumulating into a decent blanket on the ground. It's fun to get to put the new snow gauge on the clothesline
to use!


As the chaining up of tires would indication, the snow can make the driveway and road a little slick even with regular plowing and shoveling, but so far it hasn't been too treacherous and it sure is pretty.


And not one to miss a chance to show off pictures of the woodshed, we've made a noticeable dent in the firewood for the season and can see the back wall. 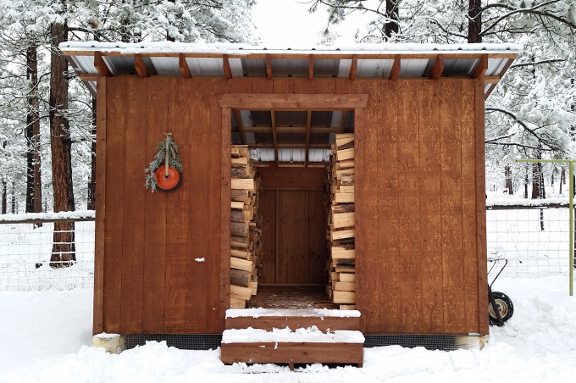 We expect perhaps a few more inches before the end of the week and below freezing temperatures, so it shall no doubt be a white Christmas. Yahoo!
Posted by TheMistressT at 12/23/2015 06:00:00 AM 3 comments: Links to this post