No Clever Title Including the Word "Shed."

I spent a good part of September building a woodshed. I expected it to take a couple of weeks, but I underestimated how physically difficult it would be for me and then we had rain, smoke, and even house guests! I had help from Handyman Nick and from Eric, but I think I did at least 85% of it myself. WOO! Some people might think that it is over built, but I would rather over build than build it again. It is 8' x 12' and should easily hold 3-4 cords of wood; more if we stacked it to the rafters. I took pictures at the end of almost all the phases and intend to post all of them here! You lucky so-and-sos!

But first a little history:

The former owners had their firewood stored on pallets behind the chicken coop. When we bought the place, we bought a couple cords of wood they had stacked there under tarps. For this photo, I am standing just outside the back door which is the very closest to the wood stove. That highlighted, red building is the chicken coop.

After the crazy snowy February of 2014, we decided to move the firewood much closer to the back door with the intention of building a wood shed in the summer of 2014, but since I spent so much time away that summer it didn't get built and we just set up pallets as they were behind the coop. It was ugly, but way more convenient with a lot less snow shoveling just to heat the house.


The photo below is taken with me standing on the same spot as the photo of the highlighted coop. MUCH closer, but also that much uglier because it is so close to the house. And no matter how tidy and satisfying the pile was at the beginning of the season, it became messy and unruly looking as winter progressed. 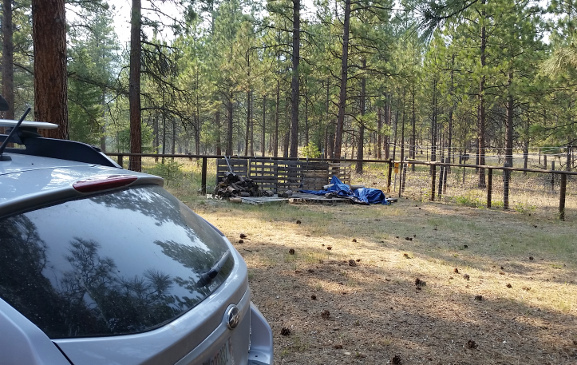 And so we hired Renaissance (Handy)Man, Nick, to design a plan to our specifications and put together a materials list. He nailed it. We also hired him to do the brute work that I knew I couldn't or that if I could would take me so long I'd never get done: He dug the holes for the footings and set up the sonotubes for me to fill with concrete. He drilled the concrete for the post holders and cut/notched the posts, then I helped him set the posts. Later on he ripped down some of the siding trim pieces and also cut down the end pieces of the metal roofing. He was also great at answering questions via text or stopping by when he was in the neighborhood working for someone else.

And now a series of in-progress photos that will probably be boring, but dammit I have this digital witness to my accomplishment and I am sharing it. Like inviting friends over to see your vacation slides... every last one of 'em.

The lumber package, with the poured footings in the background. 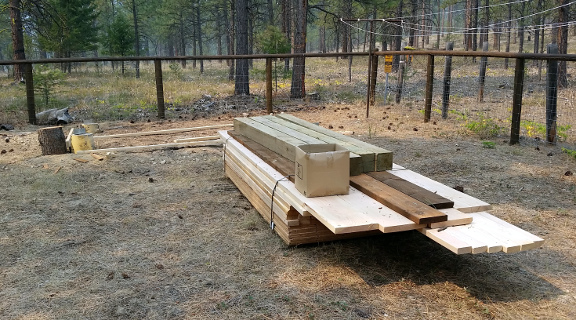 The opening shot again, because it's the only one I took before the floor went down. 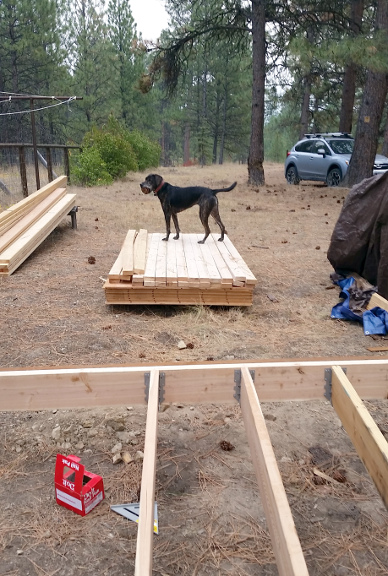 Posts up, headers up, floor down. I went to a small, family lumber mill in Florence to get rough sawn fir, in a true 1" thick. Nick suggested this instead of 3/4" plywood for ventilation and it is why the floor joists are 16" on-center.


Rafters up and back wall framed. 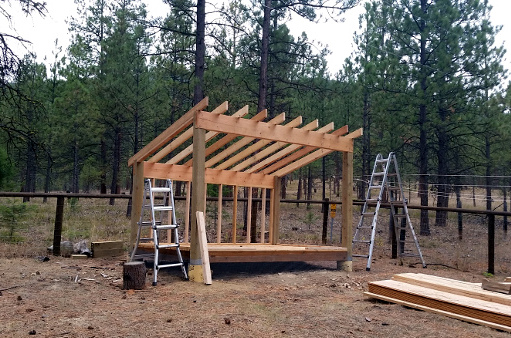 Side walls framed. All this framing is with swinging a hammer. It would have gone sooooo much faster with a pneumatic nail gun... I thought I had one of dad's Senco guns in my things, but it turns out it is a stapler. D'oh! 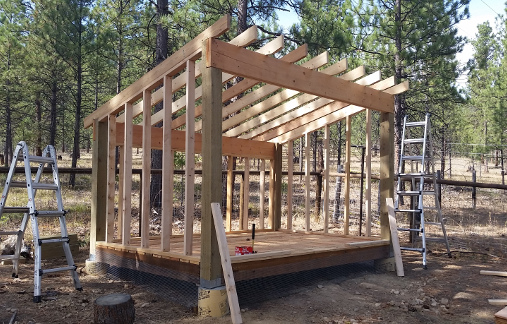 Front walls up with doorway in the center! 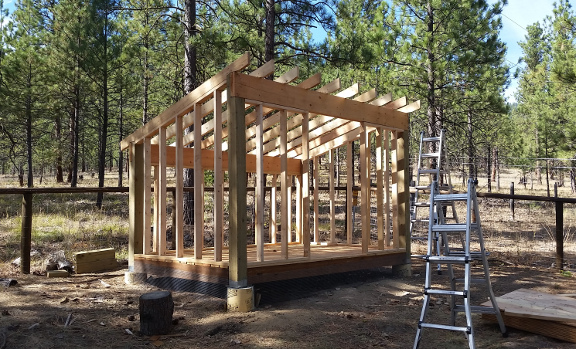 When I got this far, I cleaned up the site then laid down in the dappled sunlight to rest and admire my work. Supervisor Betty took this as an opportunity to suggest that fetching would be a way better way to celebrate "our" accomplishment. 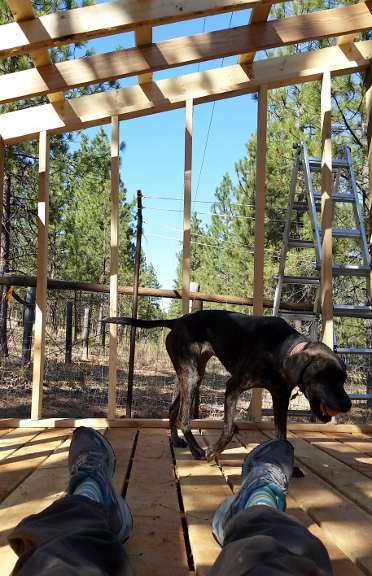 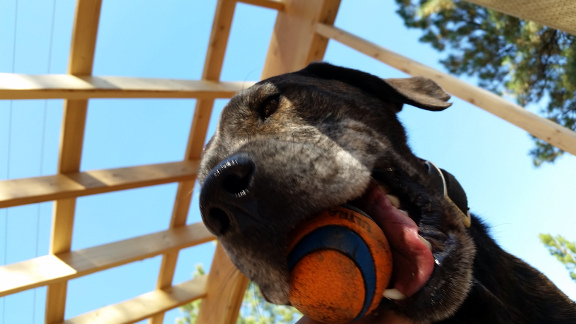 Drip edge and roof panels up! This was before Nick came back to cut the end panels. So I took those two back down. Sigh. Instead of just solid and opaque metal, I specified for 2 clear, poly-carbonate panels for light. No reason to run power to the woodshed or struggle in dim light, either. 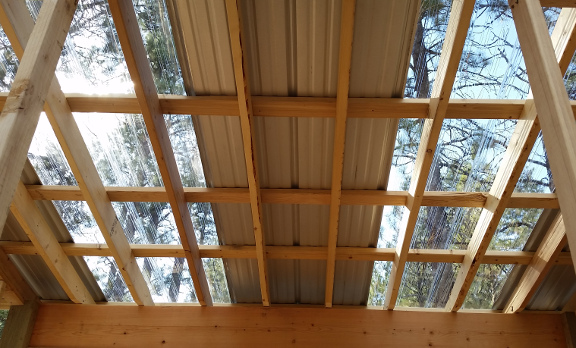 Before the siding could go up, Inspector Delia had to verify it's quality and that the chipmunks were hiding under the stack. 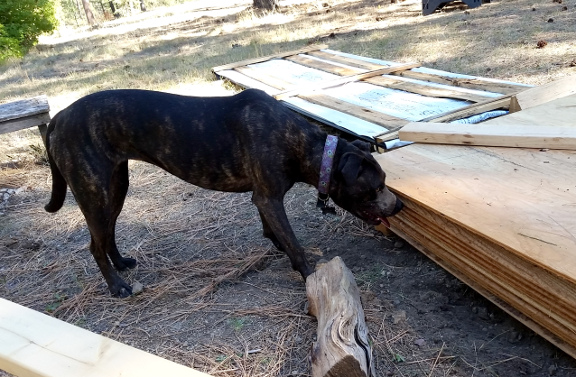 Siding up, but not the trim. 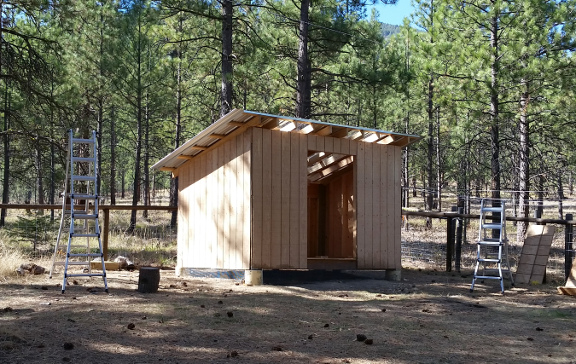 Trim up and end panels of roofing off to be cut. 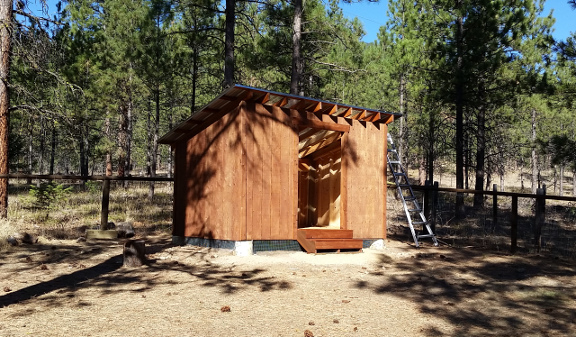 ... for the first load of fire wood to be delivered!


Some details that make it a "really good design" as spoken by our firewood supplier, Mike. Mostly it's about ventilation to keep that wood dry and let it further season.


The gaps between the rafters were left open not only for ventilation, but also so the wind that might come in the front opening* doesn't off push the roof. 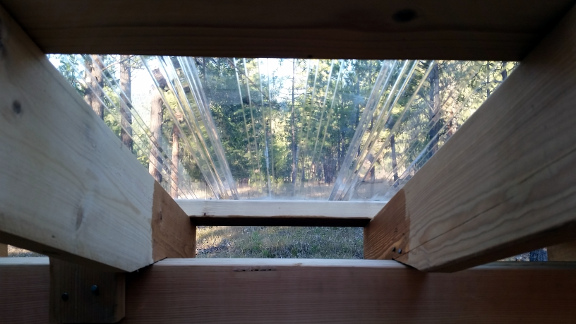 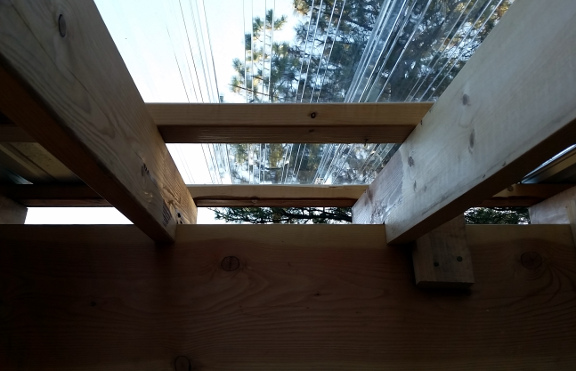 I added hardware cloth under the shed to prevent dog toys, and thus dogs, from going under there. 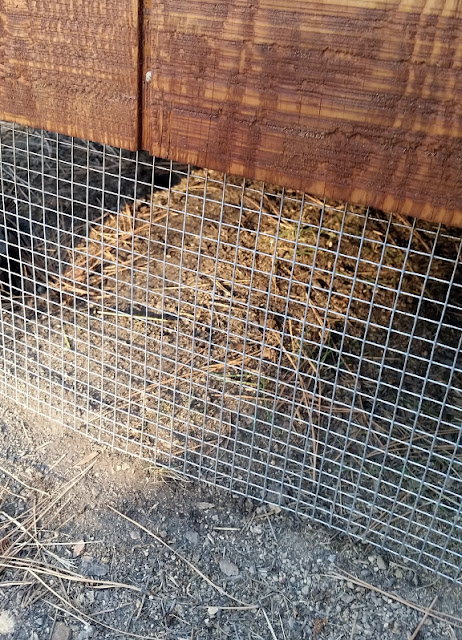 And finally the view from the forest. 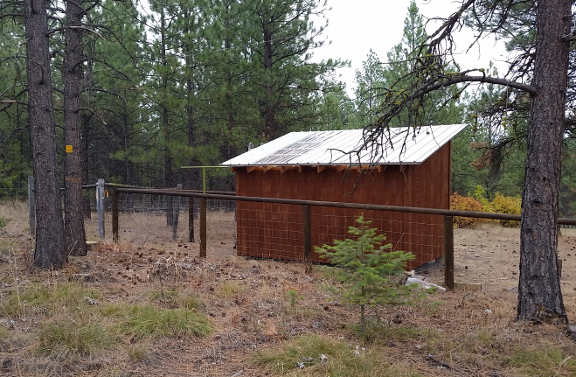 * I think that next year I will add a sliding barn-style door. We'll see how much snow blows in there, how often the dogs get in there going after the inevitable chipmunk invasion, etc.

It feels so good to read comments! If you're leaving one (or more!), THANK YOU! If you're not... c'mon, already!